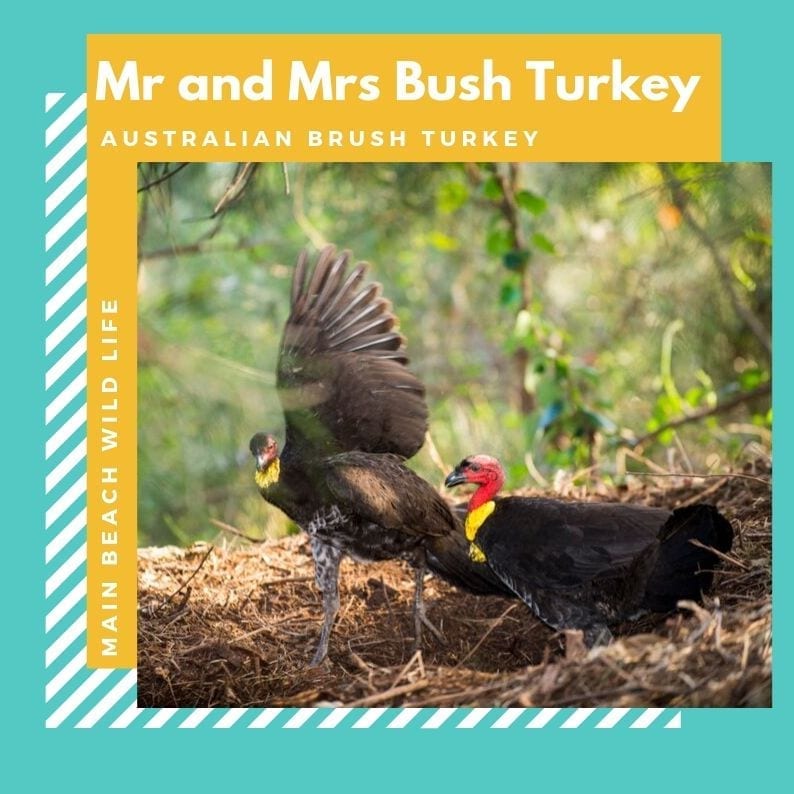 The “Brush Turkey” is also known as “Bush or Scrub turkeys.” Mr and Mrs Turkey have a large family here in Main and contribute significantly to the Main Beach Wild Life experience.

They are a large sometime stroppy bird that grows to 60–75 cm long and a wingspan of 85 cm. Males and females are a similar sized. Their colouring is predominantly blue-black, with grey-edged breast feathers and featherless deep red head and neck.. They have an upright fanlike tail and very strong legs.

The male brush-turkey has a large, bright yellow wattle that hangs from its neck, while the female’s is smaller and paler.

Chicks don’t look much like their parents, as they’re small, plump birds with rich brown feathers. They grow fast, and within a few months a chick will have the dull blue-black plumage and the characteristic upright tail. Its head and neck will have become a featherless rich pink.

The brush-turkey will breed at any time of the year, but most breeding occurs from September to December.

The male brush-turkey builds a mound of plant litter and soil, adding or removing material to keep it at a constant temperature of 33 degrees Celsius. A mound is usually about 2–4 m across and 1 m high.

The male spends many hours each day building and maintaining his mound. He will defend his mound and will only allow a female onto it when he thinks it’s the right temperature.

A brush-turkey will take a large mouthful of the mound to check whether it’s at the right temperature. They have highly accurate heat sensors inside their upper bill. When the temperature is too high, the male will rake material off the top layer to allow heat to escape. If the temperature is too low, the male will heap more material onto the mound to build its insulation. Watching a brush-turkey build and take care of its mound is fascinating and gives suburban dwellers an insight into the life of a unique Australian animal.

Up to 24 eggs are put into holes about half a metre deep in the mound and then covered. The male brush-turkey keeps watch while the eggs incubate, making sure the temperature is just right and keeping any predators at bay. After approximately 50 days the chicks hatch and are immediately independent.

Introduced predators, goannas, snakes and in-ground swimming pools all make life hard for young brush-turkeys and the mortality rate is high. The chance of an egg becoming an adult brush-turkey is as little as one in 200!

While brush-turkeys may look slow while scratching among leaves looking for food, they can move fast when disturbed. They eat insects, native fruits and seeds. Adult birds feed throughout the day, while young birds forage in the pre-dawn light and in the twilight to avoid predators.

Brush Turkeys are unusual in that they will join forces to kill a snake, circling and stamping their feet whilst drawing closer to their hapless victim.

About the Author: Steve

A passionate 'Active Lifestyler which makes Main Beach my nirvana! I am Chief Editor of the "Main Beach Lifestyler" email magazine, the architect of the global Cancer Hub "The Cancer Tool Kit Series" and the person behind #UnCancered You can dig deeper @ www.steveholmes.net.au

This site uses Akismet to reduce spam. Learn how your comment data is processed.